Ten Miles Down – Half Marathon Training

It’s Thursday, holla!  It feels like a Friday though.  We got to wear jeans all week though, so this week has been pretty nice!  Please go vote for me today if you don’t mind.  It takes less than a minute; I promise.  I’m in 6th place now, and I need to be in the top 5.  You can vote every 24 hours for the next 5 days.  Thank you so much!!!  Don’t forget to enter the giveaways here, here, here and here that end this weekend.If you follow me on Instagram, you already I finished my 10 mile run last night!  Since I apparently adopted my husband’s same training plan that he used for his half marathon a couple of years ago (the just go out and run at the last minute plan), I am training the week of.  Yes, that would be for my half marathon that is in 3 days.  Better late than never, right?!  So, I got home about 5:30 last night and changed clothes, got a few things together for work and school, and then headed out to start my run.  Shane had promised me for over a week that he would run with me last night some.  When I was ready to run (or as ready as I would ever be), Shane told me that he really wasn’t feeling like running and wanted to know if he could just follow me in the golf cart.  Say what?!  Sounds like a cruel joke, doesn’t it?  I told him that was fine though, but wasn’t really sure what I thought about it.  So he got the golf cart ready (beer in hand) and we left!  We had to stay in Harbor Town and couldn’t get on the street or the riverwalk since he had the golf cart.  He alternated between riding along in front of me and riding along behind me (and had to drive home for about 4 bathroom breaks, remember he had beer with him), but he stayed with me the whole time aside from that.  We got a few crazy looks from some of the neighbors, but most of them know us, and there wasn’t much traffic in our neighborhood last night, so it worked out just fine.  I just wish I would have had someone to take a picture of us; I know we looked hilarious!  I knew I either looked like Forrest Gump running minus the large group of followers and the beard, or Shane just looked like a straight up creeper, haha!  I told him neighbors were probably calling the cops telling them there was some weirdo following a girl running through the neighborhood in the dark.  It was a long night, and it was actually my whole night too.  By the time I finished, it was dinner time and then bed time.  Now I remember why I don’t like long distances – it takes up too much time lol! 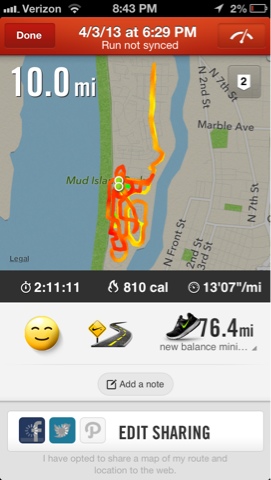 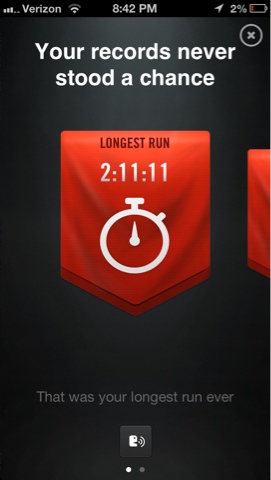 The good thing about having a creeper SAG (support and gear) is that he had chapstick for me, was my photographer, kept it from getting boring and monotonous, and he was there to keep me motivated to keep going.  Overall, I felt great the entire run.  It was cold, windy, and it rained the entire time, but my throat never got dry, my breathing was great, and I didn’t ever really get tired.  My shoes did get wet which didn’t help my blister, but oh well.  My legs did get a little sore though near the end, but eventually it was just a numbing sore feeling, and I kept going.  As Lora reminded me last night, don’t get injured, I was a little nervous about doing too much so close to the run this Sunday.  Somehow I got lucky and was only sore for a day after my 8 mile run last week, but I wasn’t sure what would happen with 10 miles.  I took two Advil as soon as I got home last night just to be safe.  Even as I’m typing this right now, I don’t feel sore at all!  Fingers crossed that I will stay that way though.  Who knows once I run this Sunday though, some soreness might come back, and then it might be really rough.  My only goal last night was to run 10 miles…and run the entire way.  No walking and no stopping.  And I did it.  I did it slowly, but I did it.  This was definitely my slowest pace ever, but it was cold and raining, so I’m okay with that.  I think I will do better on Sunday.  I usually do better under pressure on race day, so hopefully I can at least have a little better pace, but the main thing is that I know I can do it and run the whole way, and that is what is important to me.  I can work on improving my pace next time (if there is a next time.)  This was my longest run ever, and this is coming from someone who is all about 1-3 mile runs, so it was a bit of a stretch, but I feel good.  Slow…but good.  = )  And after we got home, Shane even cooked me some brinner (breakfast for dinner) consisting of paleo banana pancakes and eggs.  Good husband in my book.  = )  Below are some of the pictures during my run that Shane took.  Can’t wait to run with Lora, Mel, Meredith, Holly and Marcia this weekend and stare at their backsides! 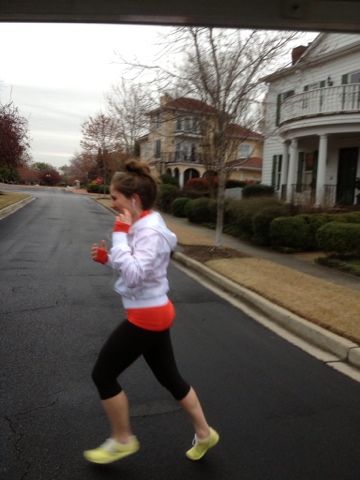 Just starting out.  I shed that jacket immediately!  Yall know I hate running in more clothes than I have to.  Look – finger holes Mel!! 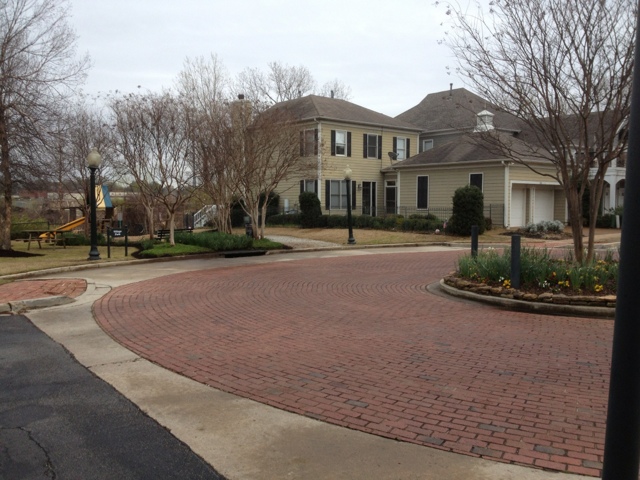 The playground at the end of our street. 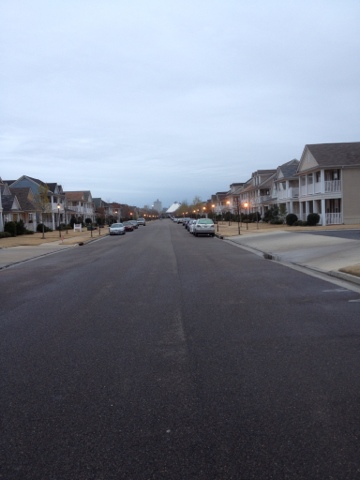 We crossed over into the next neighborhood, Island Place, which is the longest street ever.  It was a long, straight run in this section, and all the houses look identical, so I had to get back over to our neighborhood for some diversity lol.  You might be able to see downtown Memphis in the background. 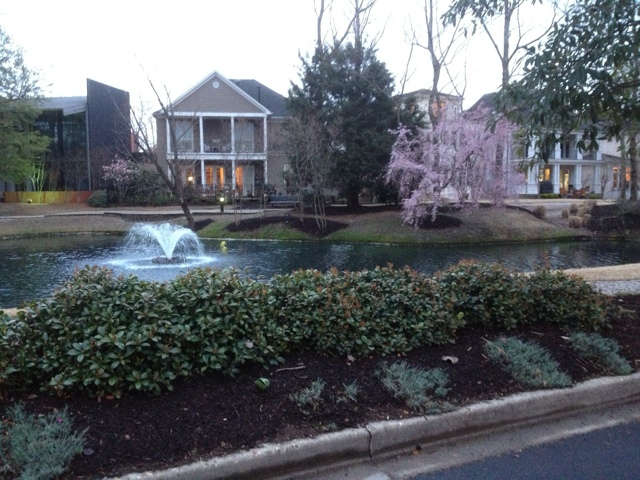 One of the beautiful ponds in my neighborhood.

Please Vote for Me.

Today I’m linking up with Tara and Bre.

30 thoughts on “Ten Miles Down – Half Marathon Training” 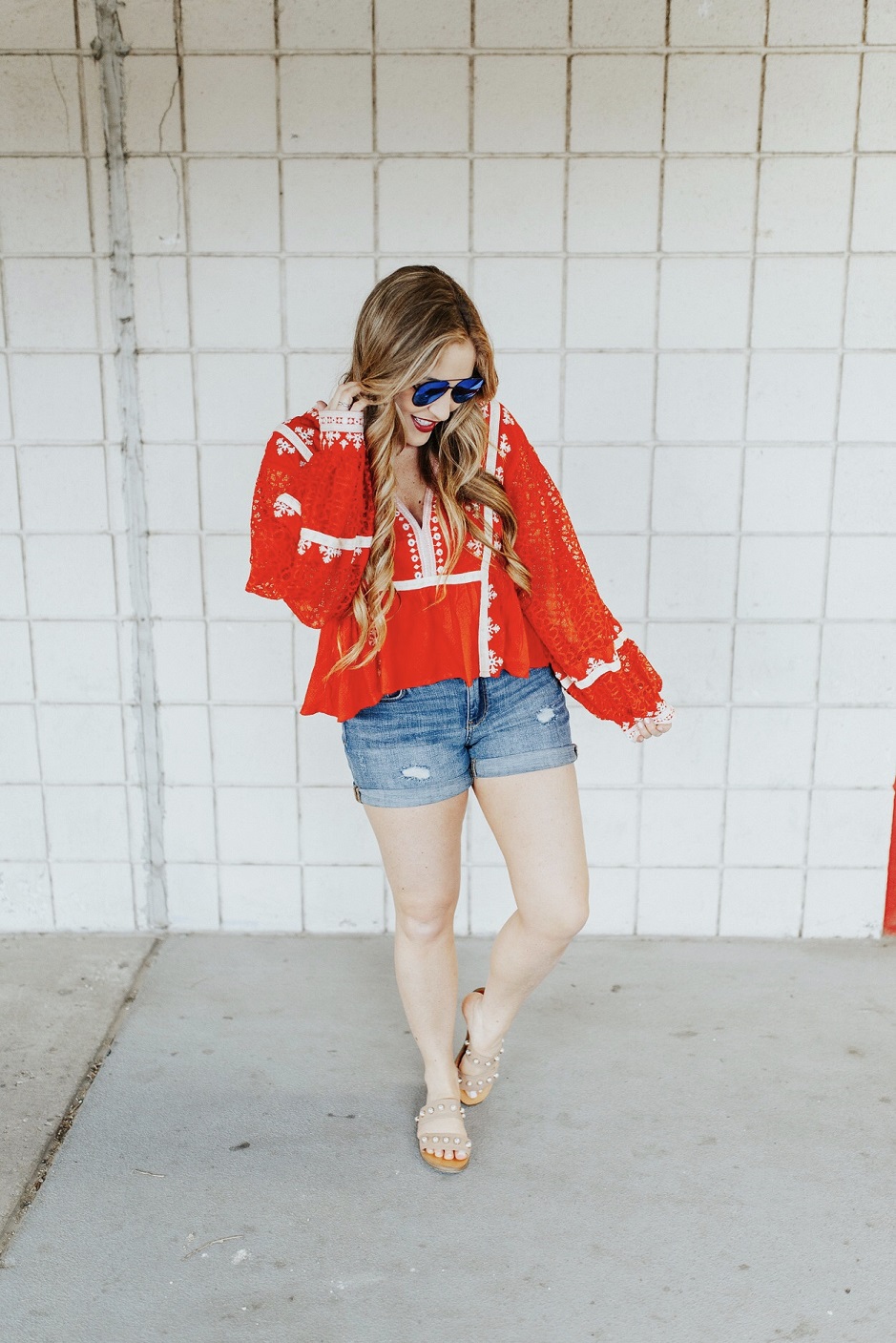